Author. SAI    On. December 01, 2015
4K Slideshow Maker Convert Picture to Video in Linux Instantly. If you need to convert some photos to video with all frames with special effects and backgorund music here is the software. Video format can be mp4, 3gp, or mpeg4...

4K Slidshow Maker is a Linux software to create slideshows video from photos. Just add your favorite photos from Instagram or from your computer, select the music, apply gorgeous effects and transitions. Advanced face-recognition technology helps not to miss your important persons. Save your slideshow in the best quality for your iPhone or share it on Facebook. The result is simply amazing!

4K Slideshow Maker can generate photos you added to video with many transitions randomly. 4K Slideshow Maker provide up to 10 seconds video length for every picture. You able to add music background for your video. And this app runs on Windows, Mac and Linux. The minus point of this software is: this software can not save your work for later editing. 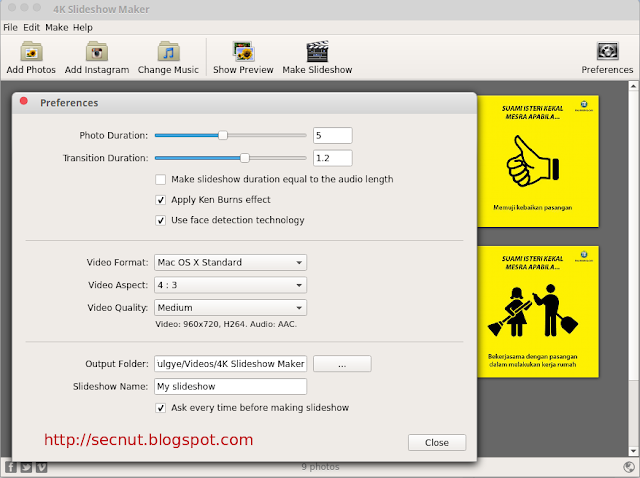 How to Install 4K Slideshow Maker for Linux

4K Slideshow maker can be installed by downloading the installer from its official website click here, after download completed you have to double click the installer file and click "Install package" button. Wait until installation finished. You can open 4K Slideshow Maker for Linux by clicking Start/Menu >> Sound & Video >> 4K Slideshow Maker.
NotesL if you are not configured this software, start menu categorized on "Other".

You could try ffDiaporama that have same functionalities with advanced mode for creating slideshow video from picture in Linux.
Multimedia App Video Editor Linux Video Slideshow

ffDiaporama Software to Make Video From Photos in Linux

Author. SAI    On. December 01, 2015
ffDiaporama -Best Software to Make Video From Photos in Linux - How to create slideshow video linux with time adjust. You can make video from photos linux using ffDiaporama which has GUI window for making a video from a bunch of photos or images, to create a time-lapse video, or a stop-motion animation.

ffDiaporama is a linux application for creating video sequences consisting of


ffDiaporama Software to Make Video From Photos in Linux

To make video from images in linux, the idea is to set a really small time between each photo, but also to be able to change this time every so often, or add some effects, to make the succession smoother in particular.

What would be perfect is a function that allows automatic cropping of the photos as well as exposure adjustment so they all have the same background and so the time-lapse video looks smoother.

The linux picture slideshow video software are assembled into a slide show by means of transitions to produce complete videos. The following options are available:


How to Install ffDiaporama for Linux Mint and Ubuntu

For those who do not subscribe to the PPA, folloe direct access to the packages here http://ffdiaporama.tuxfamily.org/?page_id=10472 --After install you can open ffDiaporama in Linux by clicking Start/Menu >> Sound & Video >> Movie Creator ffDiaporama
Multimedia App Video Editor Linux Video Slideshow
Home