Author. SAI    On. October 15, 2019
Darktable Best Photoshop Lightroom Linux Alternative FREE. Darktable is an Open Source Photography Software --a photo workflow software for Linux source photography workflow application and RAW developer. This guide will show you how to install Darktable as a photography software for linux and its review.

Darktable become popular program for photography because have same functionalities which is similiar to Adobe Photoshop Lightroom, thus will make Darktable is the best Lightroom equivalent software.

Darktable is an open source photography workflow application and RAW developer. RAW is the unprocessed capture straight from the camera's sensor to the memory card, nothing has been altered.

There are multiple alternatives in the open source world for RAW development (ufraw, dcraw, rawtherapee) but darktable tries to fill the gap between the excellent existing free raw converters and image management tools (such as e.g. ufraw, rawstudio, f-spot, digikam, shotwell).

It focuses on the workflow to make it easier for the photographer to quickly handle the thousands of images a day of shooting can produce. It's also one of the very few FOSS projects able to do tethered shooting.

How to Install Darktable in Linux

Darktable can be found on Software Center, so you can install Darktable through Terminal by typing:
You can open Darktable after install by clicking Start/Menu >> Graphics >> Darktable 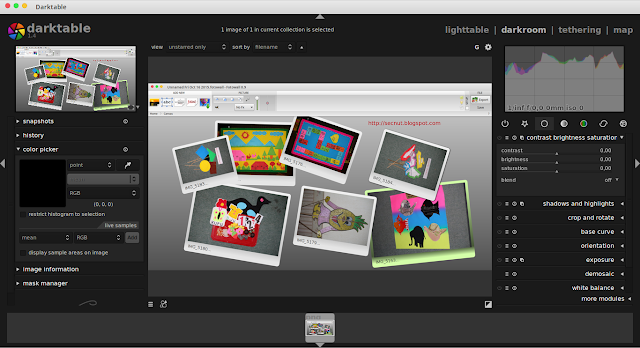 We recommend Darktable to subtitute Photoshop Lightroom. It is powerfull software and more over it is FREE.
Graphic Design Photo Editor

GIMP Plugin called G'MIC has predefined preset for image processing along with flexibility for creative applications. It has a very lightweight core that is mature code and comes with a complete set of manipulation and filter commands which operate on a stack of images.

G'MIC has been made available as an easy-to-use plug-in for GIMP. It extends this retouching software capabilities by offering a large number of pre-defined image filters and effects. Of course, the plug-in is highly customizable and it is possible to add your own custom G'MIC-written filters in it.

GREYC's Magic Image Computing (G'MIC) provide important functionalities for image retouching tool which has been made available as a GIMP plugin. G'MIC comes with a large number of pre-defined image filters and effects (more than 230) and works on Linux, Windows and Mac OS.

How to Install GREYC's Magic Image Computing (G'MIC) in Linux

To install GMIC in Linux Mint and Ubuntu follow these steps:

G'MIC is an open framework: the default script language can be extended with custom G'MIC-written commands, defining thus new image available filters or effects. By the way, it already contains a substantial set of pre-defined image processing algorithms and pipelines (more than 1000).

G'MIC has been designed with portability in mind, and runs on different platforms (Windows, Unix, MacOSX). It is distributed under the CeCILL license (GPL-compatible). Since 2008, it has been developed in the Image Team of the GREYC laboratory, in Caen/France, by permanent researchers working in the field of image processing on a daily basis.
Graphic Design Photo Editor

Author. SAI    On. December 01, 2016
Simple and Best Photo Collage Maker for Linux Using PhotoCollage. There are many photo collage software for linux such as Fotowall which available on repository and PhotoCollage which have more functionalities and better I think.

PhotoCollage is a free and open source tool written in Python. It assembles the input photographs you give it to generate a big poster. Photos are arranged to fill the whole poster, however you can influence the algorithm to change the final layout. You can also set a custom border between photos, and save the generated image in the resolution you want.

It provides a library to create photo layouts and posters, and a GTK graphical user interface. PhotoCollage is written in Python (compatible with versions 2 and 3) and requires the Python Imaging Library (PIL). 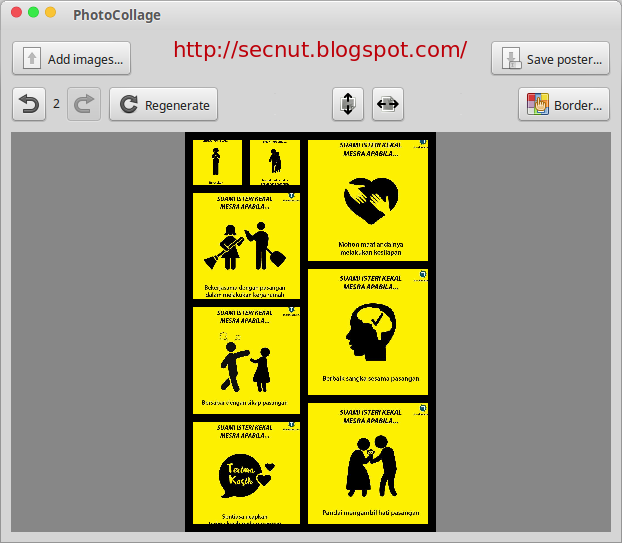 Dependency of PhotoCollage Software for Linux


Features of PhotoCollage for Linux

How to Install PhotoCollage in Linux Mint and Ubuntu

The project is hosted on github.com, you can run below commands in terminal (Ctrl+Alt+T) one by one to get the code and install it:
Thanks to dhor, the package is also available in his PPA for Linux Mint 17.x and Ubuntu 14.04. Below commands will add the PPA and install PhotoCollage from Terminal:

Author. SAI    On. August 08, 2016
Easily Create Photo Collage in Linux Using Fotowall Free. Fotowall is an opensource creative tool that lets you play with your pixels as you've always wanted! Make the perfect arrangement with your photos, add text, live video from your webcam and the best internet pictures.

With fotowall you can
Fotowall is a creative tool that allows you to layout your photos or pictures in a personal way. You can add pictures, then resize, move, change colors, text, shadows, etc..

How to Install Fotowall in Linux - Photo Collage  Maker

Fotowall has been added to repository of Ubuntu, so that you can install Fotowall by executing these command:
Wait until installation complete, you can open Fotowall after install by clicking Start/Menu >> Graphics >> Fotowall 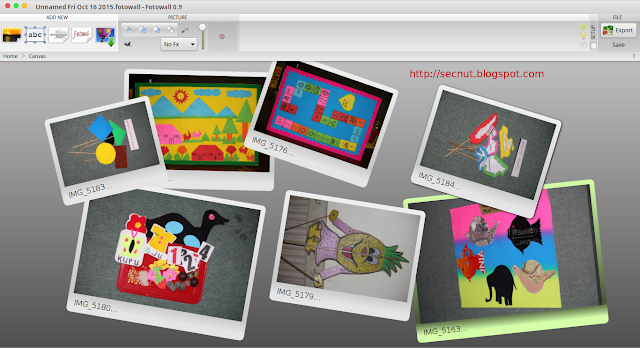 FotoWall is a wallpaper generator rendering some of your favorite pictures in a nice and smooth high resolution composition. To try another photo collage craeator for Linux you should try "PhotoCollage"

The interface is intuitive:
Fotowall lets you design from scratch a montage of photos and word blocks. You can add special visual effects to individual photos as well as the entire canvas.

This app lets you extensively play around with the canvas design. The result is stunning and personalized photo displays that can be saved as screen backgrounds or exported as poster art.

Fotowall uses the steps you would follow in working with physical photos on a poster board. So you can import pictures from your own digitized collection or import them directly from the Internet. Plus, you can add text, adjust stacking and rotate as well as resize images.
Photo Collage Photo Editor

Author. SAI    On. December 01, 2015
GIMP Best Photoshop Alternative in Linux + GIMP Review. For you who use Photoshop, in Linux there is a program which similiar to Photoshop called GIMP (GNU Image Manipulation Program).

This Photoshop compatible linux  is a freely distributed piece of software for such tasks as photo retouching, image composition and image authoring. It works on many operating systems, in many languages.

GIMP is a multi-platform photo manipulation tool. GIMP is an acronym for GNU Image Manipulation Program. The GIMP is suitable for a variety of image manipulation tasks, including photo retouching, image composition, and image construction.

GIMP has many capabilities. It can be used as a simple paint program, an expert quality photo retouching program, an online batch processing system, a mass production image renderer, an image format converter, etc.

GIMP is expandable and extensible. It is designed to be augmented with plug-ins and extensions to do just about anything. The advanced scripting interface allows everything from the simplest task to the most complex image manipulation procedures to be easily scripted. 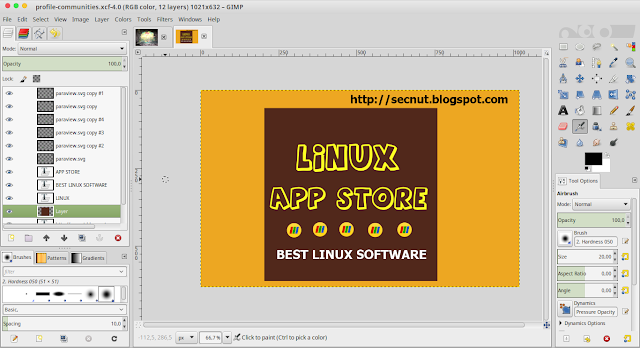 How to Install GIMP for Linux Mint

Because of GIMP is the Best Photoshop Alternative in Linux. GIMP program installed by default in Linux Mint, so you don't need to install GIMP.

You can also design any banner, editing image exported to various format. The tools are laid out as one would expect for this type of app. The UI has a modern look and feel to it. And best of all, you can switch to Single-Window Mode, a feature many people were eager to get.

GIMP can be used as completely replace Photoshop for Linux, the menu, tools, and preset that have same functionalities to Photosphop. The file format support ranges from the common likes of JPEG (JFIF), GIF, PNG, TIFF to special use formats such as the multi-resolution and multi-color-depth Windows icon files. The architecture allows to extend GIMP's format capabilities with a plug-in.
Graphic Design Photo Editor
Home