2 Task Manager for Linux to Monitor Memory and CPU Usage

Author. SAI    On. June 28, 2020
In Linux, we can check and monitor the memory usage, cpu usage in real time from the Terminal command or using graphical interface. Also we can see the up time, kill or end process of unwanted application from our running machine.

Linux is the most stable operating system, thus it been used as server OS long time ago until now. Beside as a server os, it is also used as desktop operating system for daily computing needs, such as for college, for office work, even for scientis. Today's Linux is not command based again because the maturity of desktop environment that you can choose and use it as you like, for me I prefer xfce because it stability and eye catching enough.

Occasionally, we need to check the cpu usage and memory which is used by our system. This is needed when we feel our computer runs heavy and lag because of any application consume lots of RAM or CPU. To do this, we can use Terminal or using GUI to monitor them.

How to Monitor Memory and CPU Usage

Chechking or monitoring computer resouce in Linux is easy. When you become a webmaster you will this tool frequently to avoid the unwanted things. There is 2 application for task manager in Linux called "htop" that run in Terminal and "Task Manager" GUI way.

HTOP is very well known task manager in Linux. This application runs using Terminal so that you have to open terminal and type htop then hit enter to see the cpu and RAM usage. If you have not installed it yet, you can install by executing these command below:

Wait until installaton progress finished, after that type htop to see the running applications on your system. To close this application you need to hit Ctrl+C button, Hitting F10 button is needed when you work on a Linux server. Here is mine: 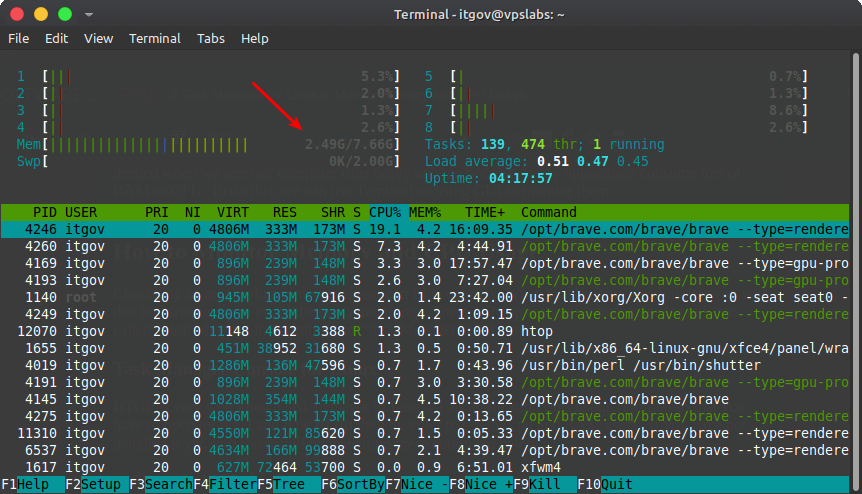 By using application called HTOP you can control any running process and stop them when ever you want. Controlling the cpu usage will prevent your machine hang or freeze, because you don't want any application using more cpu. Now let's we see the interface: it has pretty and simple interface. For the first time I open the htop it provide an understandable value. You can also sort the usage by clicking the CPU or MEM (highlighted with green color), it is very good and simple apps.

Desktop Environment (DE) will provide task manager by default. For example I am using xfce desktop, can access the task manager from Menu >> System >> Task Manager. 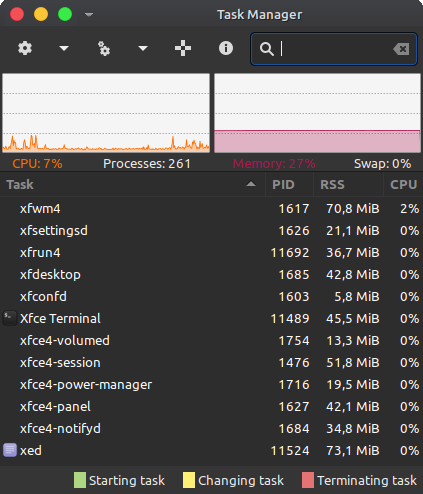 Task manager for Ubuntu / Linux Mint / other distro is a feature which provide detailed programs and running processes on your system. It display numbers of resource usage to measure performance and process, also see which program that not responded.

There are several program to check the RAM or CPU in real time, but the most favorite and widely used is htop because it simplycity and stability.
Linux Mint Tutorial

Now days so many Linux alternative to Windows applications that can we apply to make our life easier and better in computing tasks. Here we go, list of Linux software which equivalent to Windows for you who are migrating or seeking the alternative Linux apps. Read the article completely! 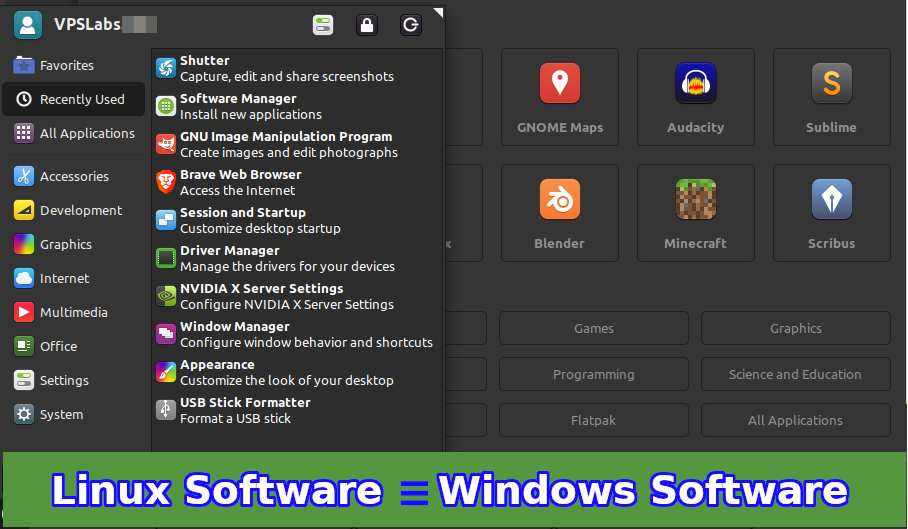 You can see the linux software review by following the provided link on every software name. To make more comfortable and easy reading, we categorize the software into a group based also we show in a similarity table as follow:

All software list we provided here is the best Linux application specially for Linux Mint and already tested by our team for a daily use.
Linux Mint Tutorial Pillar Content
Home