SQLite Studio is a handy tool that was designed in order to assist you in managing the contents of your SQLite databases. The user interface is simple and allows users to quickly create databases, tables, columns or triggers

SQLite Studio is also a simple SQLite database management tool. The tool will allow you to create, edit and delete SQLite databases. With this apps you can Manage Multiple SQLite Databases also do an unlimited SQL query. 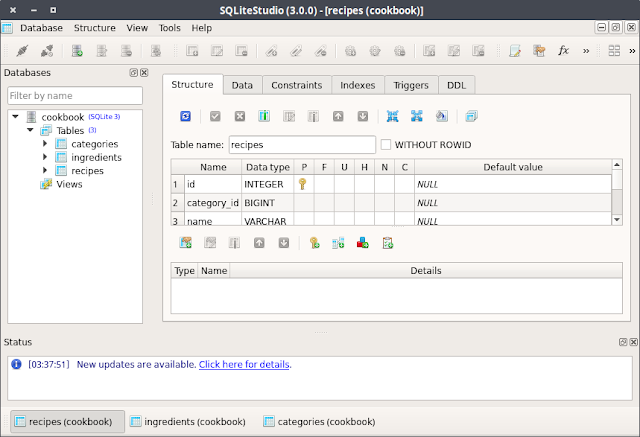 How to Install SQLite Studio on Linux Mint

The SQLite Studio is very useful and you can perform any database related task very easy! This program is better than the paid SQLite Manager IMO. This softwrae is not only free, but, it doesn't lock the file, which is important as I don't want to close the program when my test my app accessing the same file.

Light Table is the next generation code editor which support many language which connects you to your creation with instant feedback and licensed under MIT. Light Table is very customizable and can display anything a Chromium browser can.

Light Table has a powerful plugin system that allows almost any aspect of the editor to be extended and customized. With over 100+ plugins, the community is able to offer eval support for new languages, create domain-specific IDEs and much more. If you're interested in writing your own plugin, see the Write a Plugin and Submit a Plugin docs. For an example ClojureScript plugin, see LightTable-Declassifier.

WATCHES
Next-gen println to keep track of important values in your code. Just add a watch to an expression and the value will be streamed back to LT in real time.

INLINE EVALUTION
No more printing to the console in order to view your results. Simply evaluate your code and the results will be displayed inline.

OPEN SOURCE
Developer tools should be open source. Every bit of Light Table's code is available to the community because none of us are as smart as all of us. 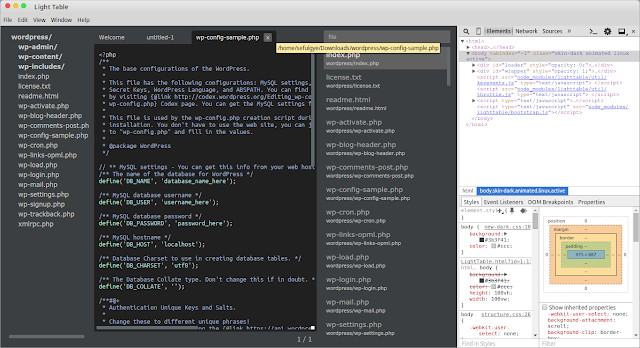 MALLEABLE
Keymaps, behaviors, and Light Table's Behavior-Object-Tag engine means you can easily shape your IDE to whatever your work requires.

PLUGIN MANAGER
The plugin manager hooks into the central list of plugins so you don't have to go hunting all over the internet to find the ones you want.

POWERFUL EDITING
Light Table is a lightweight, clean, and sleek interface with all of the power and functionality you need and expect from your editor.

How to Install Light Table Code Editor in Linux


Do You Need Light Table Listed on Start Menu?

Yes you can create a short cut and will be listed on Start Menu entry. How we do this? Follow these steps.
Here is the script:

Make sure you have changed the red colored on script above. Adjust to yours, where the Ligt Table extracted. The Light Table now can be found on Start Menu >> Programming >> Light Table.

Programming Software Linux
LINUX MINT Tuesday, December 01, 2015
Best mockup software for Linux, best free wireframing tool in Linux. Design Application's Interface in Linux With Pencil Evolus. Draw a wireframe diagram using prototyping tool software for Linux called Pencil from Evolus. Pencil is built for the purpose of providing a free and open-source GUI prototyping tool that you can easily install and use to create mockups in Linux, Windows and Mac for free.

Pencil is an open-source GUI prototyping tool that's available for ALL platforms, by Evolution Solutions Company (Evolus). The Pencil Project's unique mission is to build a free and opensource tool for making diagrams and GUI prototyping that everyone can use.


How to Install Pencil from Evolus

To install lates version of Pencil from Evolus project in Linux, you can install by following these steps:

Pencil also can be installed through Linux Terminal by executing these command:
You can open Pencil after install in linux by clicking Start/Menu >> Programming >> Pencil. 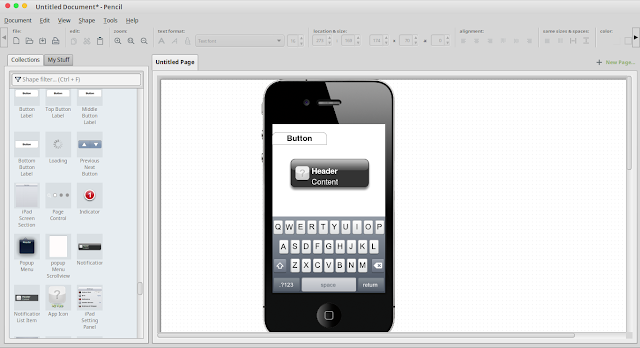 Pencil controls shapes in its document by mean of stencils. Each stencil (Rectangle, for example) is indeed a template to generate shapes. Each template defines:
Stencils are organized in collections. Each collection contains a set of related stencils and can be installed into or uninstalled from Pencil using the collection manager.

Pencil provides various built-in shapes collection for wireframe drawing with different types of user interface ranging from desktop to mobile platforms. Pencil now supports connectors which can be used to "wire" shapes together in a diagram. A collection of flowchart shapes are also available for drawing diagrams.

Besides of that, you can also export your work as PNG files or as a web page that can be delivered to the viewers. Pencil also supports exporting documents into popular formats including OpenOffice/ LibreOffice text documents, Inkscape SVG and Adobe PDF. See Pencil documentation and manual page here.

And Code uses a tools service architecture that enables it to use many of the same technologies that power Visual Studio, including Roslyn for .NET, TypeScript, the Visual Studio debugging engine, and more. In future previews, as we continue to evolve and refine this architecture, Visual Studio Code will include a public extensibility model that lets developers build and use plug-ins, and richly customize their edit-build-debug experience. 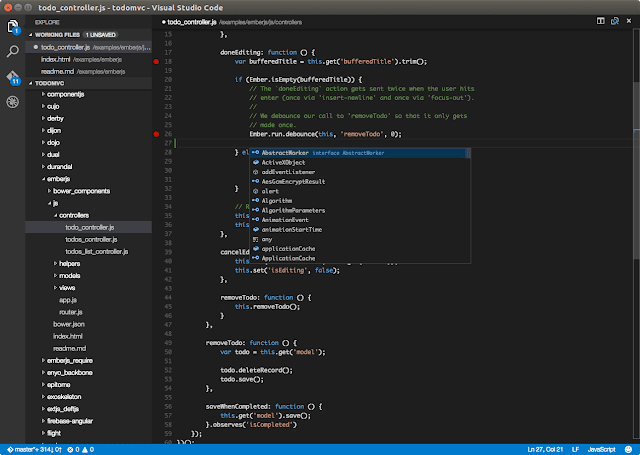 At its heart, Visual Studio Code features a powerful, fast code editor great for day-to-day use. The Preview release of Code already has many of the features developers need in a code and text editor, including navigation, keyboard support with customizable bindings, syntax highlighting, bracket matching, auto indentation, and snippets, with support for dozens of languages.

Code includes great tooling for web technologies such as HTML, CSS, LESS, SASS, and JSON. Code also integrates with package managers and repositories, and builds and other common tasks to make everyday workflows faster. And Code understands Git, and delivers great Git workflows and source diffs integrated with the editor.

Architecturally, Visual Studio Code combines the best of web, native, and language-specific technologies. Using the GitHub Electron Shell, Code combines web technologies such as JavaScript and Node.js with the speed and flexibility of native apps. Code uses a newer, faster version of the same industrial-strength HTML-based editor that has powered the “Monaco” cloud editor, Internet Explorer's F12 Tools, and other projects.

Code Text Editor for Linux Programming Software Linux
LINUX MINT Wednesday, December 10, 2014
Install Brackets Text Editor in Linux Mint / Ubuntu. With focused visual tools and preprocessor support, Brackets is a modern text editor that makes it easy to design in the browser. Try Creative Cloud Extract (preview) for Brackets for an easy way to get clean, minimal CSS straight from a PSD with no generated code.

Brackets is a lightweight, yet powerful, modern text editor. We blend visual tools into the editor so you get the right amount of help when you want it. With new features and extensions released every 3-4 weeks, it's like getting presents all year long.

Instead of jumping between file tabs, Brackets lets you open a window into the code you care about most. Want to work on the CSS that applies to a specific ID? Put your mouse cursor on that ID, push Command / Ctrl+E and Brackets will show you all the CSS selectors with that ID in an inline window so you can work on your code side-by-side without any popups.

Get a real-time connection to your browser. Make changes to CSS and HTML and you'll instantly see those changes on screen. Also see where your CSS selector is being applied in the browser by simply putting your cursor on it. It's the power of a code editor with the convenience of in-browser dev tools.

Work with preprocessors in a whole new way. We know how important preprocessors are to your workflow. That’s why we want to make Brackets the best code editor for preprocessors out there. With Brackets you can use Quick Edit and Live Highlight with your LESS and SCSS files which will make working with them easier than ever.

Before we have released a post about another text editor for Linux called Atom. They are quite similar. From my point of view, as a Lua user:


But both being free to use, no harm in trying. You might like Caret (Chrome web store) as it is also quite similar to those and is open source as well.

You can also install  Popular Extensions for Brackets Text Editor

How to Install Atom Text Editor in Linux Mint / Ubuntu

Code Text Editor for Linux Programming Software Linux
LINUX MINT Wednesday, December 10, 2014
How to Install Atom Text Editor in Linux Mint / Ubuntu. Atom is a hackable text editor for the 21st Century. Atom can customize to do anything, but also use productively on the first day without ever touching a config file. Atom is modern, approachable, and hackable to the core.

Atom is a desktop application based on web technologies. Like other desktop apps, it has its own icon in the dock, native menus and dialogs, and full access to the file system. Open the dev tools, however, and Atom's web-based core shines through. Whether you're tweaking the look of Atom's interface with CSS or adding major features with HTML and JavaScript, it's never been easier to take control of your editor.

Node.js support makes it trivial to access the file system, spawn subprocesses, and even start servers directly from within your editor. Need a library? Choose from over 50 thousand in Node's package repository. Need to call into C or C++? That's possible, too.

Seamless integration allows you to freely mix usage of Node and browser APIs. Manipulate the file system and write to the DOM, all from a single JavaScript function.

No one wants to waste time configuring their editor before they can start using it. Atom comes loaded with the features you've come to expect from a modern text editor. Here are a few of them:

Atom is composed of over 50 open-source packages that integrate around a minimal core. Our goal is a deeply extensible system that blurs the distinction between "user" and "developer". Don't like some part of Atom? Replace it with your own package, then upload it to the central repository on atom.io so everyone else can use it too.

You can install the autocomplete plus on Atom so that it shows inline - there is even path and snippets autocompleting packages which is pretty nice. Atom is really focused on extensibility so if something is not as you want, be sure to take a look at the available packages.
Next Home
Subscribe to: Posts (Atom)